1. Huanghuali (黄花梨), often referred to as Chinese Rosewood or Fragrant Rosewood, is the crown jewel among Classical Chinese furniture materials. It is one of the two most precious types of wood beside Zitan.

Huanghuali is a type of hardwood found in the coastal provinces of southern China especially Hainan, Fujian, Guangdong, and Zhejiang. Due to extremely long growth cycle and difficulty in harvesting, some Huanghuali were imported from Indochina during the Ming and Qing Dynasties. Apart from its rarity, Huanghuali is known for its fragrance, yellowish color, and the lustrous texture that stands the test of time. Basically this makes Huanghuali furniture a very much sought after and highly-prized product today, as well as a symbol of wealth and status of collectors and Chinese home decorators.

2. Zitan (紫檀) or Red/Purple Sandalwood is another type of wood material coveted by Classical Chinese furniture collectors. Similar to Huanghuali in terms of scarcity, it was found in China’s Hainan province, Indochina, as well as along India’s coasts, thus in the past it needed to be imported via difficult sea voyages, resulting in exorbitant prizes.

Zitan is famous for its density (that actual piece of Zitan would sink in the water), outstanding dark purple or red color, and a fine texture that allows intricate carvings. Woods such as Huanghuali and Zitan have detailed lines on their surface layers, so the decorative method of lacquer is not required. For collectors, they offer a more natural sense and thus very much sought after. Both Huanghuali and Zitan, because of their unique texture and decorative effect, became the most recognizable kind and had much influence over modern people’s evaluation of Ming and Qing style furniture.

3. Yumu (榆木) or Northern Elm is one of the most traditonal materials for furniture-making across China. Since its English common name is Elm, it is differentiated from Jumu (榉木) which is commonly called Southern Elm despite being a different kind of wood. Yumu can be found across northern regions like Shanxi, Shandong, Hebei, and Henan. However, Yumu is more of a collective name for many varieties of woods found in Northern China especially the Yellow River Basin. Typically very large and wide in size, quite strong in texture, with beautiful rough, wave-like patterns on the surface, it is ideal for making chair seats or table tops where the patterns can be displayed. Yumu’s colors range from brownish yellow to dark purple.

In earlier days, Northern elm wood was mainly produced into offering furniture such as worshipping table mostly found in temples or ancestral halls, and the details of these ancient pieces still remain intact despite without lacquer treatment, adding a very natural feel to the atmosphere. As it’s been made into furniture for centuries, certain collectors also pursue ancient Northern elm pieces, though not quite crazed after as high-end Huanghuali and Zitan.

4. Jumu (榉木) or Southern Elm or sometimes translated as Zelkova or Beech, is more concentrated in the Southern or Jiangnan regions such as Jiangsu, Zhejiang, and Anhui Provinces. But Jumu furniture is especially popular around Suzhou. 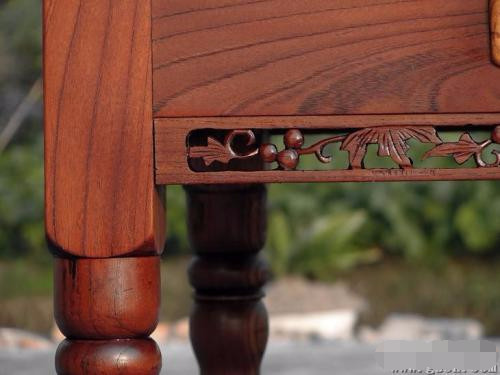 Jumu is denser and harder than Yumu, and the pattern on its surface is more refined. Jumu’s most distinguished feature is its natural grain which looks like layered mountain peaks, which is specifically referred to as ‘Pagoda Pattern (宝塔纹)’, a characteristic of Suzhou woodworking.  Top grade Jumu is called ‘Blood Ju (Xue Ju)’ due to its reddish brown color similar to that of Huanghuali. On another note, in Chinese there’s a saying ‘北榆南榉’ (‘Northern Yu, Southern Ju’) to differentiate these two types of wood. Both Northern and Southern elms are also famous for their long-lasting quality.

5. Baimu (柏木) or Cypress, categorized by a Song Dynasty text as ‘miscellaneous softwood’, includes several varieties and can be found across China, but cultivation is quite concentrated in Sichuan, western Hubei, and Guizhou. A certain variety of Baimu grown in Sichuan Province called ‘Weeping Cypress’ is considered as having finer quality timber thus more suitable for making furniture. Baimu is known for its strong aroma and resistance to decay, insect, as well as water, making it a preferred material for architecture, bridge construction, shipbuilding, as well as carpentry. In furniture-making, Baimu is sometimes used in decorative parts along with other hardwoods, so it’s also considered a secondary material.

6. Songmu (松木) or Pine is also quite commonly used for making Chinese furniture pieces and parts. Also considered as softwood, although its timber is light and soft as well as generally less resistant to decay, Songmu is more practical as simpler tools can quite easily cut into it, and more wallet-friendly. 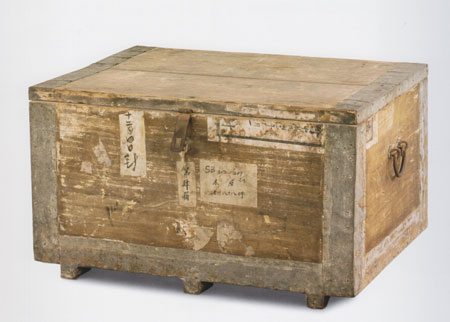 It can be used for making an entire piece of furniture, but with lighter quality than hardwoods, Songmu is often used for making decorative parts such as table tops along with other sturdier wood. Since its surface grain and pattern are not regarded as outstanding as other types of woods, Songmu furniture is sometimes finished with lacquered as a way of decoration.

7. Zhangmu (樟木) or Camphor can be found particularly in Taiwan, but also the regions of Fujian, Jiangxi, Hunan and Hebei Provinces. Zhangmu’s most unique feature is its scent that also acts as insect repellent and does not fade with time. As a result it is highly popular for making textile-storing chests and cabinets. Please bear in mind that even though these woods have English common names like pine, elm, or beech, they are still likely different species to woods found in the West. Anyway, recognizing which type of materials the furniture or decorative piece is made of also allows us to peak into fascinating stories behind them, like from which region, local culture, and woodworking craft tradition they are.

So that we can all the more appreciate their origins. If you’re curious about any piece in particular, please don’t hesitate to contact our Yesterday Once Again inbox right away and we’ll respond asap!