While we’re still on the topic of artistic themes that can be found in Chinese style furniture and decorations, let’s take a look at one of the more traditional takes:  plants and flowers.

Not so different to their Western counterparts, Chinese art and culture often center around nature and sophisticated symbolism behind them, and today Yesterday Once Again would like to bring the Four Gentlemen to your attention!

The term ‘Four Gentlemen (君子jūnzǐ)’ is derived from a Confucian concept of ‘gentlemen’ or ‘intellectuals’.

To be called as such, they must conduct themselves with a specific set of noble virtues, in this case perseverance, humility, uprightness, calmness in the face of adversary.

In terms of artistic motif, the Four Gentlemen undoubtedly belongs to the Birds & Flowers (huāniǎo) category, using four different plants/flowers to depict the four seasons of the year with subtle meanings behind each. Plum Blossom (梅méi): one of the most beloved flowers in the Chinese culture, plum blossom in the Four Gentlemen represents winter.

Since it blooms in the dead of winter when all is covered in snow and continues blooming into early spring, it symbolizes perseverance and tenacity in the face of hardships – a character very much admired by the Chinese, as well as the arrival of a fresh beginning. 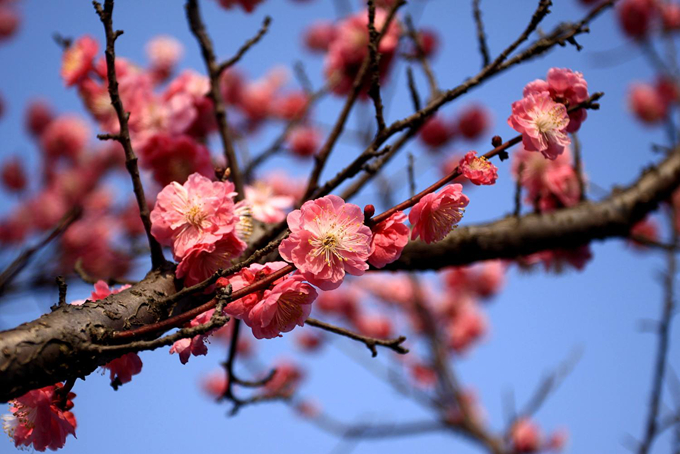 A branch of red plum blossoms against the white snow is one of the most popular imageries in Chinese art, and we can often see furniture and decorative pieces with plum blossom motif. Wild Orchid (兰lán): represents spring. Orchid grows in the depth of faraway mountains but it sends off gentle fragrances and remains beautiful even if there is no one to appreciate it.

As such it symbolizes the rare, quiet elegance that is humble and never overpowering nor competing with others. 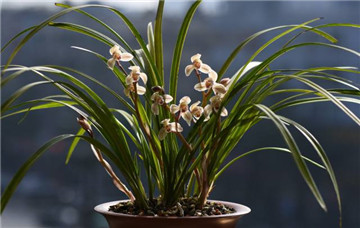 As it grows in secluded wilderness, orchid also signifies the refined beauty or nobility untainted by the turbulence of the society. Its fragility and gentleness can induce pity in the hearts of the beholders. Bamboo (竹zhú): also a very popular motif on its own, bamboo represents summer with its fresh poles. It stands tall and straight, reflecting the balance and upright integrity. Yet in strong wind it bends but does not break, showing flexibility and tenacity in difficult conditions. In addition, the bamboo stalks are hollow on the inside, signifying humility and readiness to serve. Bamboo doesn’t blossom nor bear fruits, but its different parts are very useful such as fresh spruces are edible, stalks can be used for homebuilding, etc.

So it’s free of temporary adornments, and instead extremely resourceful. Chrysanthemum (菊jú): represents autumn. Chrysanthemum blooms when most other flowers wither away in autumn and early winter, withstanding the cold frost and blossoming into delicate, bright colors. As such it’s praised for its fortitude and defiance of harsh conditions. 
On the other hand, chrysanthemum has a connotation to Taoism’s reclusion, renouncing the worldly way of life, so it also symbolizes indifference to fame and fortune, a noble character much appreciated in the Chinese culture. The Four Gentlemen as a motif has existed since the ancient time, and was featured in both paintings and poetries. The subject has also been popular across East Asia such as countries like Japan, Korea, and Vietnam. Traditionally during celebrations like the Chinese New Year, the Four Gentlemen are also used as a sign of blessings to loved ones. 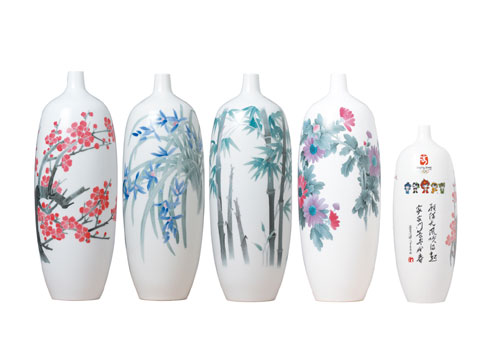 As for decoration, the four is often displayed both individually and as a set, and often put up in the reception area or living room.

Otherwise it is also used as a theme to decorate furniture and items like vases, cabinets, etc., allowing residents to not only enjoy the depiction of four seasons but also be reminded of the noble virtues one should follow.

For those of you who want more of this Chinese, natural-themed decorations please stay tuned for more Yesterday Once Again content!