Yes, the Bauhaus once said ‘form follows function’, and it is what some people apply to their interior design choices, but we at YOA look at it a bit differently, because if you can get a combo treat then why not? The reason being: when it’s Chinese furniture or decorative pieces, they likely come along with an art piece!

For Chinese furniture, so long as there are enough flat surfaces, they often incorporate some sort of depiction as a part of decorative patterns. Today, we can still find lots of surviving antique cabinets, screens, cupboards, or even chairs with panels to spare decorated with landscapes and garden scenes – very much a characteristic of Chinese furniture. A two-door cabinet in red lacquer unique to pieces from the Qing era
(photo credit: www.metmuseum.org/art/collection/search/40248)

Unlike ‘conventional’ Chinese painting scrolls mostly drawn in ink wash style, these depictions were created via several methods such as drawing and coloring, engraving, and then getting glazed or inlaid or lacquered upon a piece of furniture or ornament.

But it wouldn’t do for the Chinese without auspicious motifs and symbolisms. So a cloth cabinet door may portray a figure of a lady to designate that the piece belonged to a lady, or a kitchenware may display scenes like a family gathering or celebration. 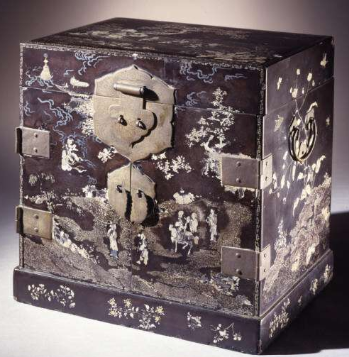 However, two of the most popular styles depicted on Chinese furniture, especially in the cases where they were owned by scholars or the upper-class, are shan shui and hua niao, borrowed from the ten categorizations of traditional Chinese paintings according to the Xuanhe Catalogue of Paintings dated back to the Song Dynasty.

A part of Dwelling in the Fuchun Mountains, an example of shan shui paintings
(photo credit: www.csstoday.com/Item/1979.aspx)

First, the shan shui (山水画 literally mountains & rivers) or the natural landscape paintings, are one of the classical and most representative styles of Chinese art. True to its title, typical shan shui paintings portray a natural scene composed of mountains at the center shrouded in mists at the top, rivers and sometimes waterfalls at the center and bottom, a path along the river, and possibly minute figures of people and a small wooden bridge.

Shan shui theme is especially popular among the ancient intellectuals and scholars, as it’s closely associated to Taoist philosophy with heavy connotations on existing in harmony with the nature. In this sense, the landscape depicted is allegorical rather than denoting actual natural scenes.

For instance, rivers depicted in the scene can be seen as a path, a significant concept in Taosim (道教 literally “the Path”). So, having a shan-shui-theme decorated piece in the study was a way to reflect their philosophical worldview and lifestyle for ancient Chinese intellectuals. Another classical subject for Chinese furniture decoration is hua niao (花鸟 literally flowers & birds) or paintings of flora and fauna, since auspicious symbolisms have always been welcomed by Chinese households.

The theme actually deals with a wider variety of animals such as fish and insects as well, as long as they indicate good meanings.

For examples, magpies and plum blossoms (喜鹊、梅花) as a blessing for the newlyweds; the ‘four gentlemen-scholar (四君子)’ or plum & orchids & bamboos & chrysanthemum (梅兰竹菊) depict the unfolding of the four seasons and symbolize great virtues in Chinese tradition; koi fish (锦鲤) for representing persevering to wealth and success according to the myth in which koi fish jumping over the dragon gate in heaven; butterflies and peonies (蝴蝶、牡丹) for love, affection, and longevity, etc. Wardrobe with mother-of-pearl and ivory decoration, circa the Ming Dynasty
(photo credit: www.metmuseum.org/art/collection/search/56356)

On a side note, the level of exquisiteness also depends on the era and the region from which the furniture originated. Shanxi Province (山西), for example, is famous for their finely decorated style that survives through generations of masters.

This owes partly to its abundant resources which allowed a variety of furniture materials, and its isolated location which made the Shanxi style less likely to be influenced by other regional styles. Shanxi furniture is more prone to be elaborately decorated with shan shui and hua niao paintings on the surfaces.

Whereas furniture from southern provinces like Zhejiang and Jiangxi prefers the lacquer finishing upon the paintings, but also adds some decorative touches with metal butterfly or bat-shaped clasps, etc.

The regional location is also an influencing factor concerning the textures and durability of the wood materials, and in some cases their shapes and forms affected by different climates, such as cabinets made in coastal areas may have slightly longer legs to counter the damp floors. At the end of the day, though knowing well that the pieces should first and foremost serve in their function as furniture, we at YOA still can’t help getting weak-kneed over such beautiful pieces heavy-laden with meanings.

It shows the meticulous way in which the ancient Chinese lived and how wonderful it is that these pieces and paintings survive through time. So, form follows function, yes, but wouldn’t it be better to get double treat with Chinese ornate pieces and furniture!