The Chinese ‘Valentine’s Day’ Does Not Fall on 14th February You may not know this, but China celebrates its own version of the “Day of Love” and it’s coming up soon!

Of course it’s not called Valentine’s Day; it’s ‘Qixi (七夕 or Double Seven)’ and the festival falls on the 7th day of the 7th lunar month of the Chinese calendar, so every year the date shifts around a little bit within August. For 2020, it’s August 25th! 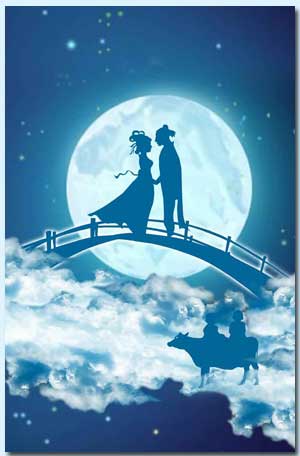 The tale behind Qixi Festival, which can be dated as far as 2,000 years ago or the period of the Han Dynasty, is the love story between the Cowherd and Weaver Goddess (Niu Lang and Zhi Nü 牛郎织女). The tale goes like this: the Weaver Goddess Zhi Nü met and fell in love with a cowherd Niu Lang when she descended to the mortal realm. They got married, had two children, and had some happy years together.

However, Zhi Nü’s mother the Queen Mother of Heaven forbade their love and called her daughter back to Heaven.

With the help of an ox under his care which turned out to be a god in disguise, Niu Lang and his children flew to heaven and pursued Zhi Nü. The Queen Mother then created the Heavenly River to separate the lovers.

The magpies, touched by their love, came together to form a bridge and let them cross the river to be together. The Queen Mother eventually came around and allowed the two lovers (plus their kids) to reunite once a year on Qixi, or the 7th day of the 7th lunar month. The reuniting scene, portrayed in a section of the Long Corridor at Bejing’s Yiheyuan or the Summer Palace

The story of Niu Lang and Zhi Nü is actually an allegory to the two stars, Altair and Vega, which would appear near each other during summer nights. While the Heavenly River actually symbolizes the Milky Way! We can only praise how imaginative ancient people were to create such beautiful story. And how do modern Chinese celebrate the traditional Qixi?

Couples usually go on a date, or buy flowers and presents for each other. If you happen to be in China during Qixi, expect commercial district to be full of decorations and promotions from florists as well as chocolate and jewelry brands.

Traditionally there are more customs and rituals such as worshipping Zhi Nü for weaving skills (she is a weaver goddess after all), but these got lost over time. Today, the overall atmosphere is closer to modern Valentine’s Day in the West. For those familiar with Japan’s Tanabata Festival, Qixi may be seen as the version it stemmed from.

It’s basically the same thing with the weaving goddess and cowherd and all, but Tanabata falls on July 7th and the Japanese celebrate it by writing their wishes on a piece of paper and hang it on bamboo branches.

On a side note, another date worth mentioning while discussing China’s Valentine is May 20th or 520 (五二零),  a near-homophone of “I love you” in Chinese (Wo Ai Ni 我爱你). Of course businesses all over China don’t mind whether it’s 14/2, 20/5 or lunar 7/7; the more festivals to celebrate, the more advertisements and promotions their customers can enjoy! While still on the topic of Qixi, magpies (喜鹊) may often come up as a motif, as they normally have an underlying tone relating to joyous (喜) news or unions. Chinese art, furniture and decoration usually feature them to designate the themes of love, marital joy, and household happiness.